One of my favorite creatures growing up were gargoyles. I loved the Disney series so much I couldn’t get enough of it. This love for this show is what inspired my Vortex Series though. The Guardians are gargoyles from another realm that protect those of paranormal descent in the human realm. They have human like bodies with skin the color of copper, bluish hide, or bronze. Each gargoyle has a long tail they use for balance an as a weapon. They have razor sharp claws the retract on their hands and feet. They even have razor sharp teeth that almost make them look like vampires and have eyes almost like black wholes.

They are actually a beautiful race that many don’t understand within the human realm. Cassie Armel is one of the first humans to work alongside them without fear. She helps them protect those the Triad seek to destroy, which turns out to be her partner Max. One of the biggest rivalries though is the Guardians verse the werewolves. They just don’t get along probably because they both are a dominant species. This will make working with Garrick and Max interesting for Cassie.

If you haven’t had the chance to check out Gargoyle Sighted the first book in my Vortex Series I strongly suggest you do. Each month I release a new chapter to my subscribers and will offer it as a freebie in ebook format once completed to them. Sign-Up Today to see more about this wonderful species.

You ever hear about the first story of how a gargoyle was created on the side of our church buildings? Check this out here:

The priest Romanus struck a deal with villagers of Rouen, promising to take care of the dragon called La Gargouille if they agreed to be baptized Boden Gargoyle Sentineland to build a church. The villagers agreed, and the priest headed to the River Seine, where he subdued the dragon in its cave and led it back to the town to be burned at the stake. The dragon’s head and neck, however, were well-tempered from his fire-breathing habits, and so would not burn. The remnants were instead mounted on the town wall. –hence, the first true gargoyle! (https://www.mythicalrealm.com/creatures/gargoyle.html) 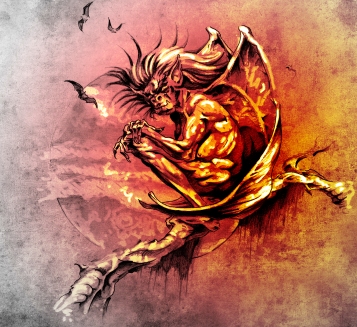 I didn’t know about gargoyles connection to dragons, but after reading that little story I now know why I love them just as much as dragons. 🙂

September just started and I am going crazy with trying to keep up with everything. To help make things even worse, I start a part-time job yesterday. The job is pretty easy to do, but the training is so boring. I wanted to kill myself yesterday—the clock just moved so slow. Either than that it was nice to get away from the screaming kids for a few hours. I plan to only work short hours during the week and every other weekend. Still that takes a lot of time away from design projects and my writing.

Things have been going slowly on the writing front. I started writing the final story in my Tales of Ferrês series. I got about 1k into it then found myself stuck for over two weeks. Nothing I did made me want to finish it. So, the day before yesterday I decided to re-write the entire story from scratch. This seemed to do the trick because I could make some headway into it finally. I am hoping if time permits I will complete half of it tomorrow since I have the day off. But, that depends on if the boys let me work on the computer or not. They have been getting pretty naughty lately, so that leaves that up in the air.

If I don’t get the story to where I want it tomorrow I gave myself two weeks to write it. Then will come the fun part—editing. Right now my editor is in her busy time with her other job. So, it will be a work in process to get this one done on time. I am thinking of having it release at the end of October. Then release the bundle book in November. I will be glad when this project is done and out of the way. I am excited about getting started on my other books for next year.

**Cough…Cough** Changing the subject, I have been working on a 30 step process to writing a novel, created by Renee Scattergood. It is taking longer than I thought to get through all the steps so I can get to the writing part. I did this process with my WIP, ‘Gargoyle Sighted’. This is the book I have been releasing by the chapter each month to my Dragon Ryder VIP Members. Since this process is changing a lot, this month I will miss the deadline and double up in November. I plan to write this entire series before I start on my next book series. Hoping this process works to kick out series faster.

If you can’t tell my month will be busy with the addition of having a normal day job. So wish me luck and hopefully next month I will have good news for everyone on my writing projects.